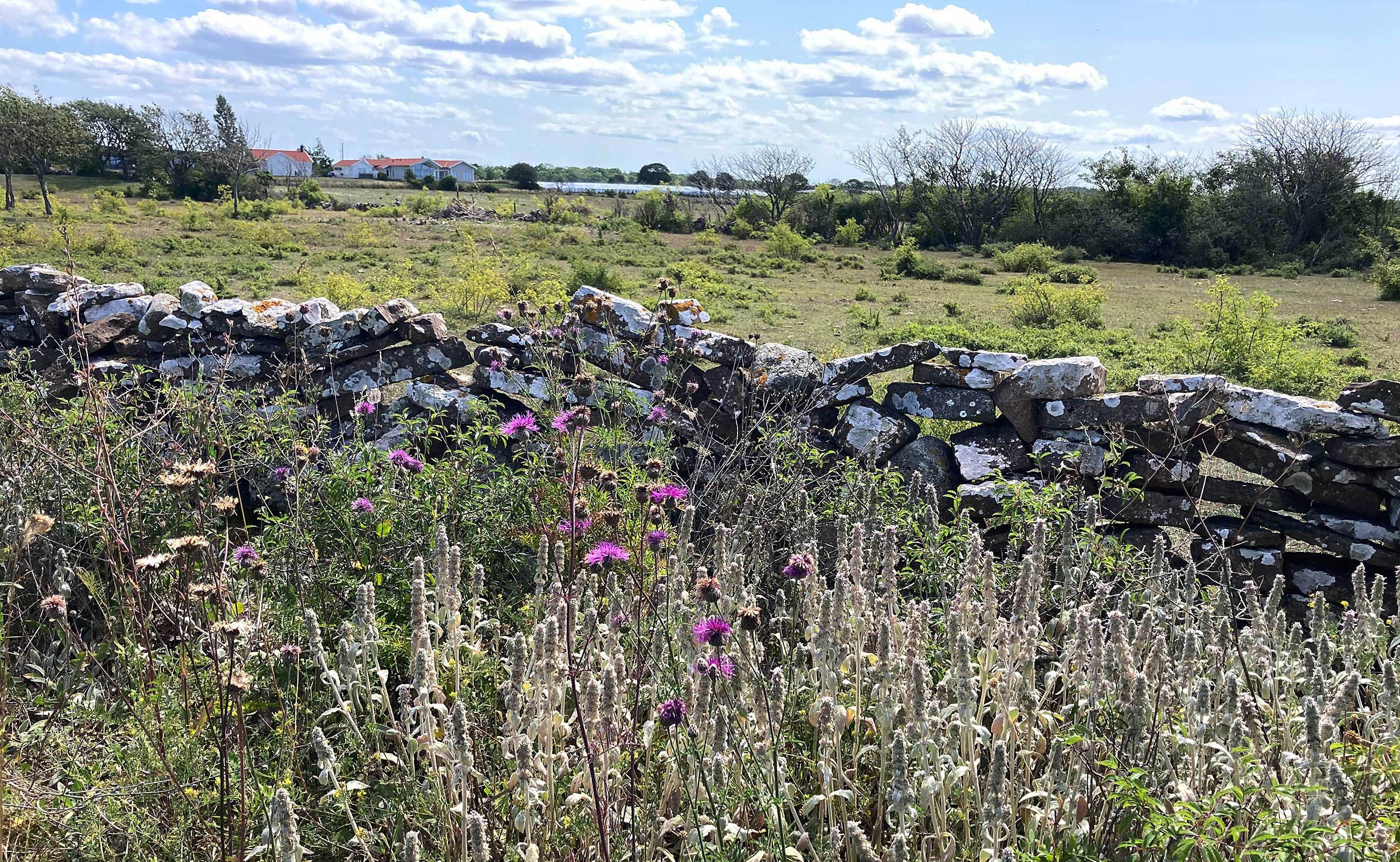 A few weeks on the Swedish island of Öland.

Öland, the second largest Swedish island looks a bit like a slipper animal tilted from the north/south axis, which you remember well from biology class.
Very elongated, very narrow. In numbers: 137 km in the longitudinal axis, at the widest point from west to east, 16 km. The highest elevation: 57 m. So you can tell very early when someone announces himself for coffee. 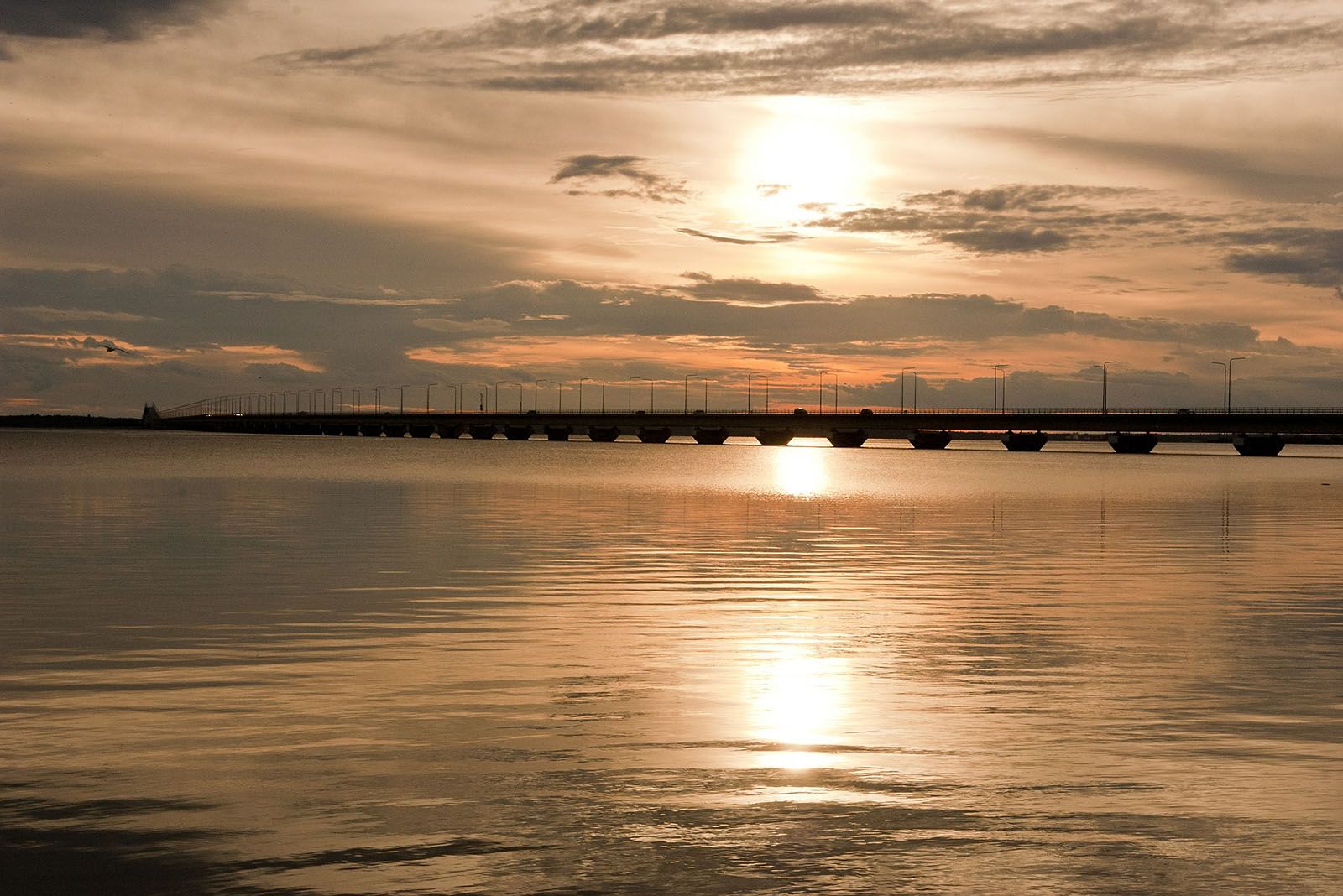 The Ölands Bridge is 6,072 meters long and connects the island with the city of Kalmar on the mainland
.
For the flora, which is what this is mostly about, the surface rocks are crucial. Öland is a young island. Just about 11,000 years ago from the sea.

Sandstone, shale and especially the limestone, together with the dry-sunny climate determine the landscape. 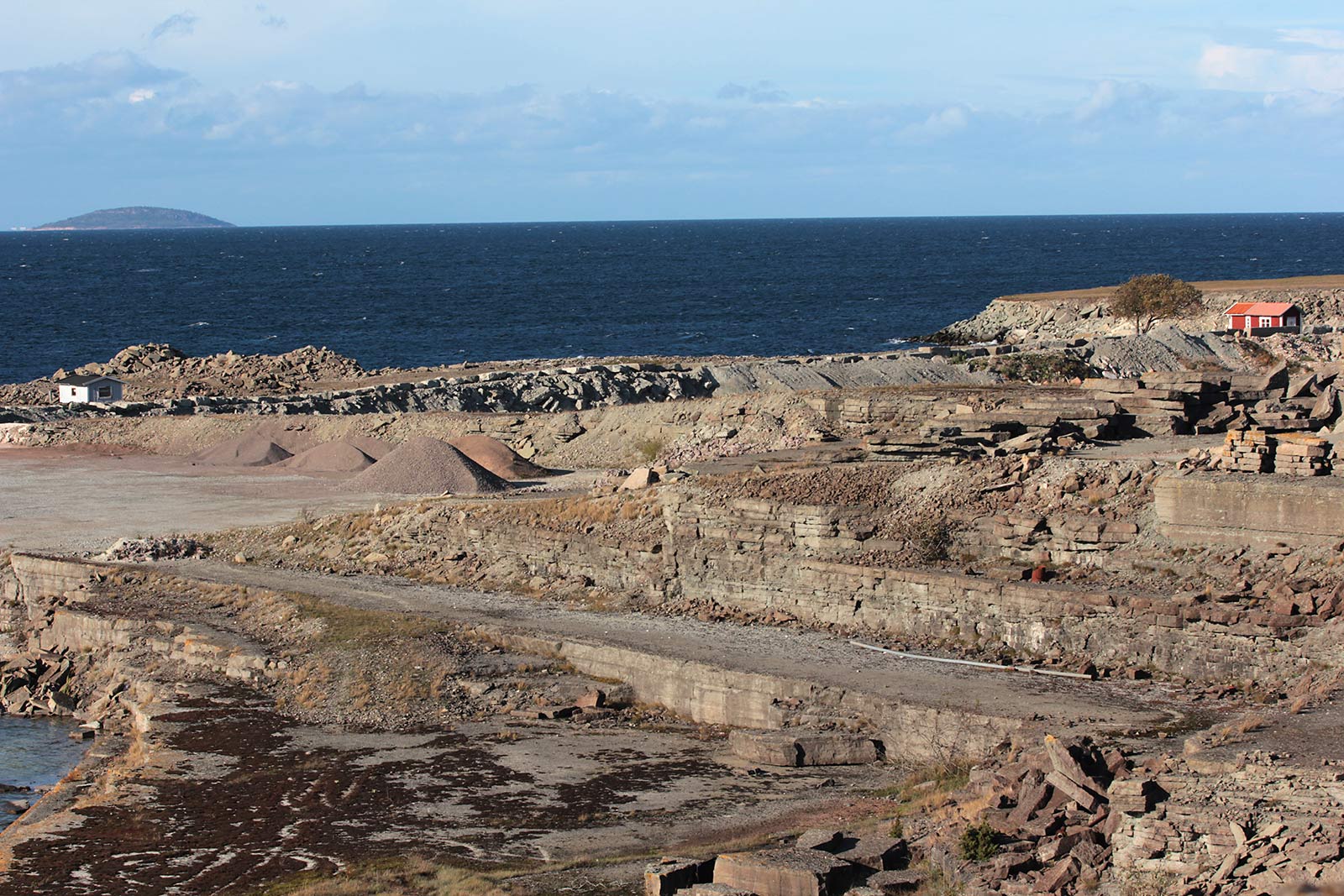 Limestone quarry in the north-west of the island. In the background the small island "Blå Jungfrun", which is now a nature reserve.

Here it looks quite different than in the rest of Sweden: little forest, much steppe, more African savannah than wooded, lake-rich Småland. The temperatures times not counted. 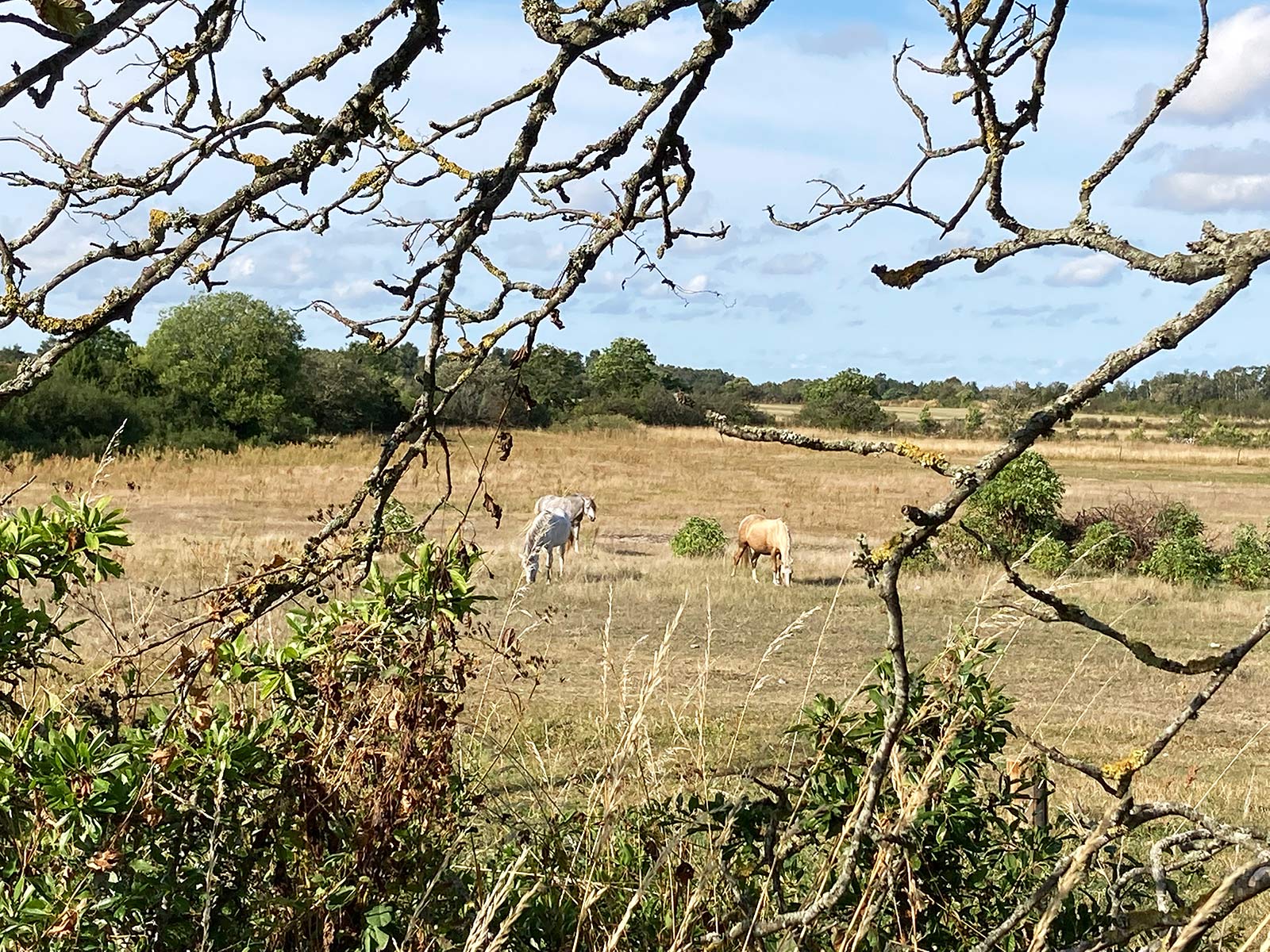 Over long distances a karstige heath landscape determines the picture, particularly in the entire southern half, As a result of wind erosion, which is reinforced by the lack of precipitation, the earth layer is only thin. To survive with agriculture in this landscape is quite difficult, as one can imagine. Nevertheless, there is a farming culture here that has its origins as early as 4000 BC.
The special landscape, the so-called Stora Alvaret, which has developed from this cultivation, belongs since the year 2000 to the world cultural heritage of the Unesco. 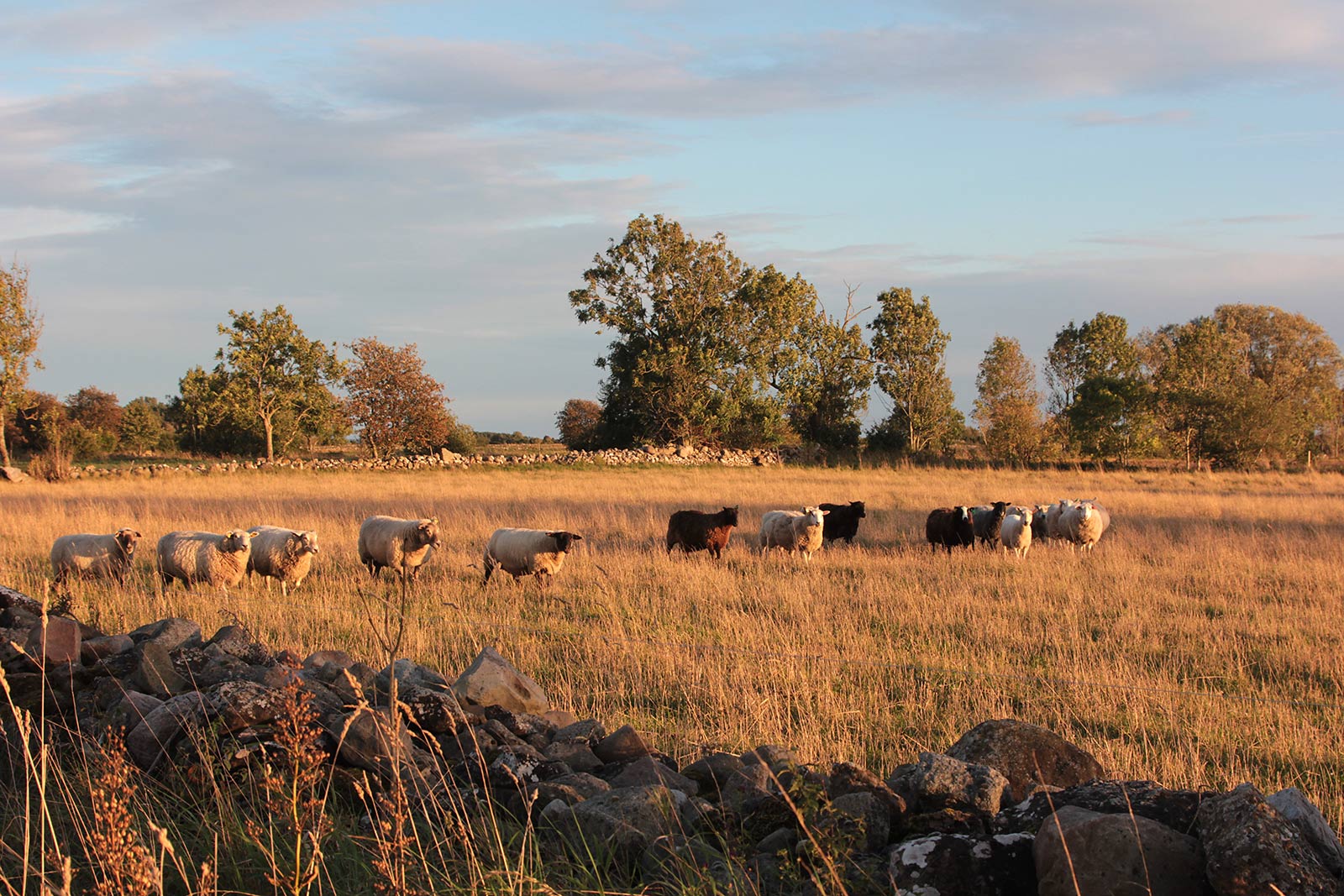 In any case, an island that has fallen a little out of the world. Suitable to leave the hustle and bustle of everyday life behind for a while. At least for a few weeks.

Typical for Öland are the many windmills. There was no running water, so the farmers had to rely on the reliable blowing wind. Of the 2000 Bockwindmühlen are still preserved about 400. There were times when there was one windmill for every less than 20 inhabitants on the island. Partly they were probably also something like a status symbol.

In such a remaining windmill we spend our vacation :) 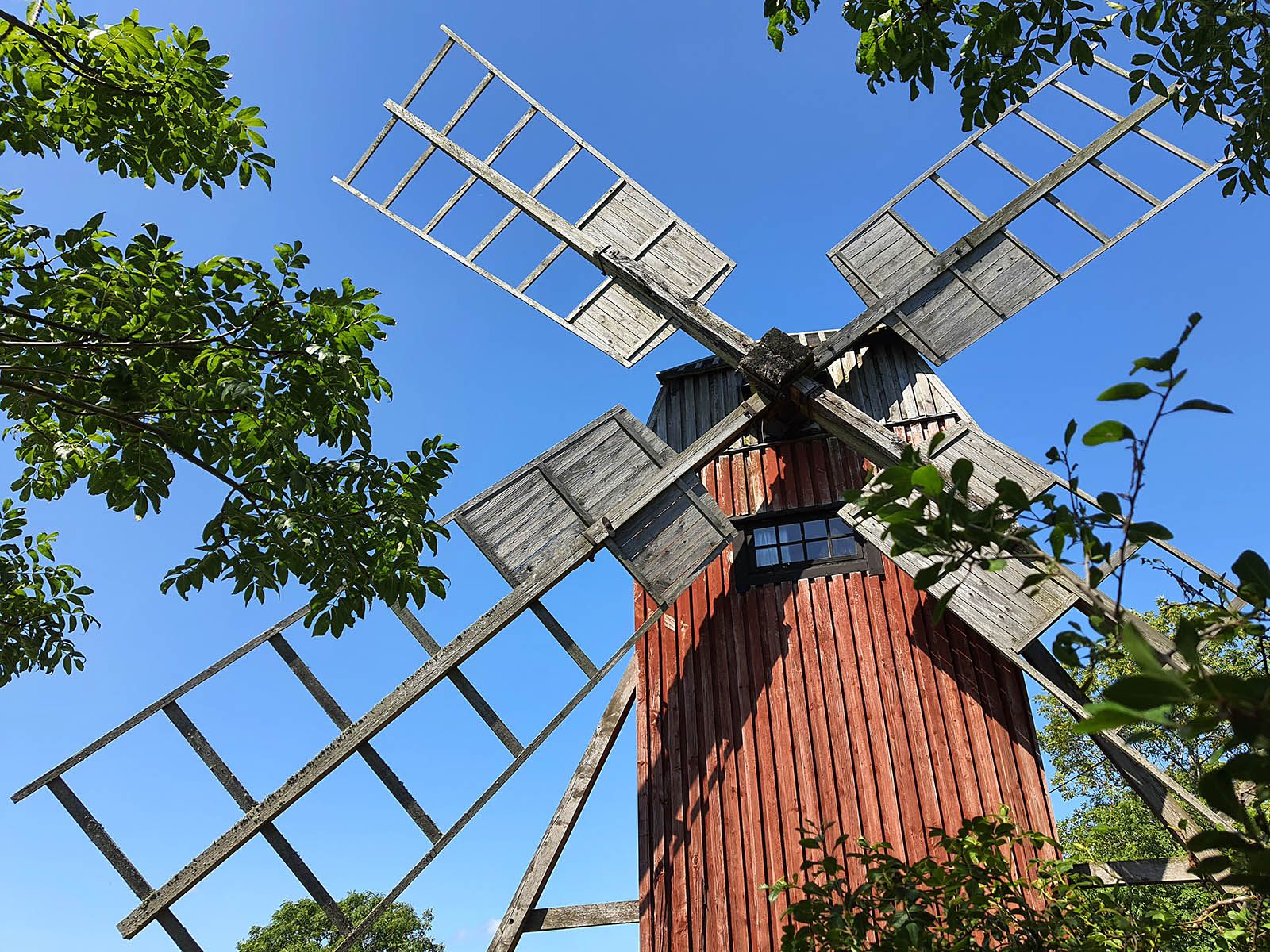 Walk 500 meters straight ahead and you are at the water. At the Baltic Sea. Anyway, in an area that wants to be neither all water nor all land. You stand there in the middle of the salt marshes with their special vegetation adapted to salinity and changing water levels. 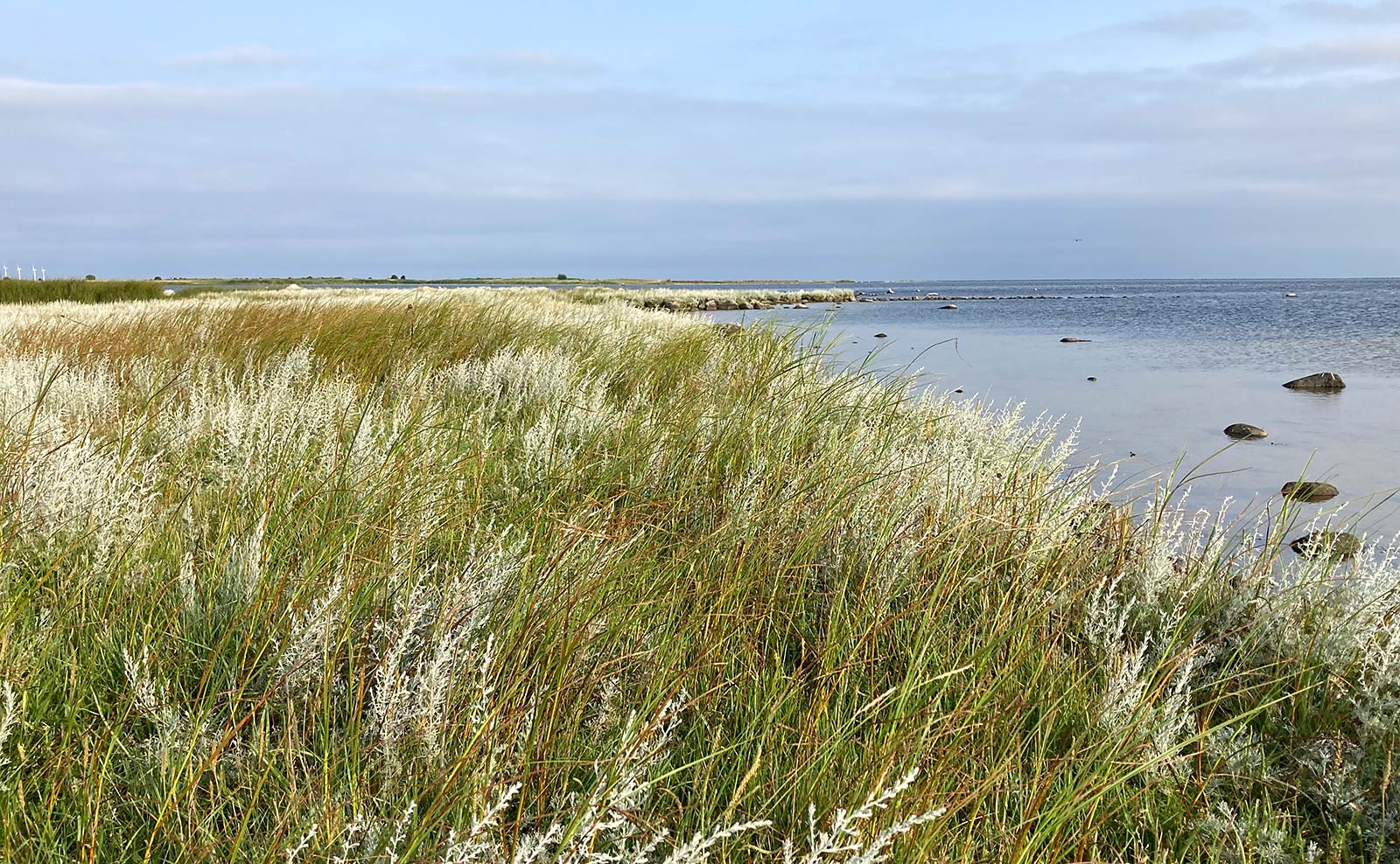 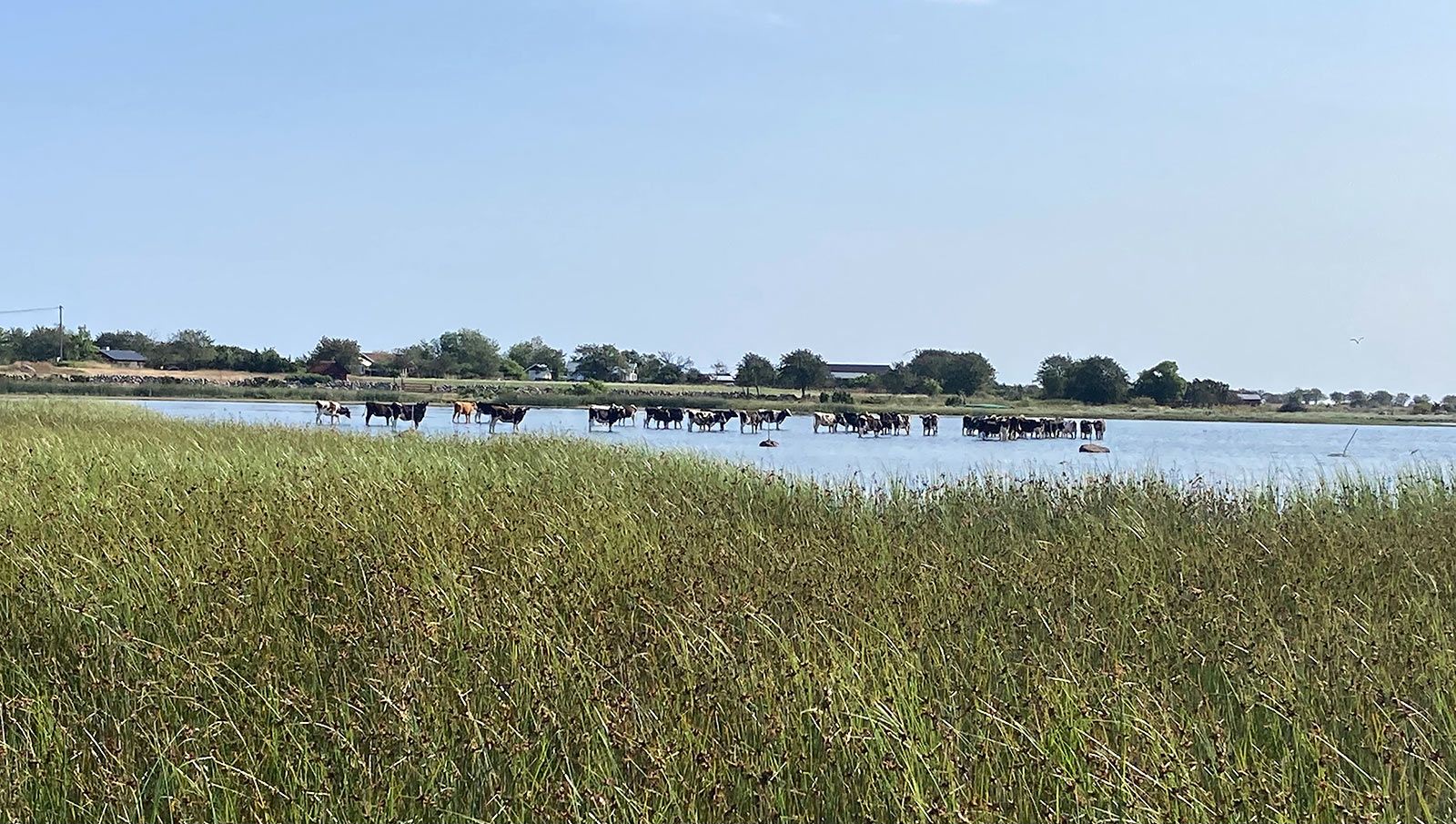 The cows are all very peaceful. You can confidently walk through the middle of a whole herd if the path continues on the other side. You should, because otherwise you can stop any hike pretty quickly. Cows are simply everywhere here. By the way, they are important landscape maintainers, without them the meadows would become overgrown rather quickly. Especially junipers and sloes grow up quickly and then it is no longer far with the biodiversity.

However, there are also the human landscape maintainers, who come every now and then in a certain rotation and remove juniper bushes on a grand scale with the chainsaw and pile them up in huge mounds. I haven't found out yet what happens to them in the end. I'd have to ask Kalle, the retired farmer in the tiny village where we ended up. He should know.

Where was I? Oh yes, by the meadows.

Well, to be honest, they don't look all that different from the ones at home. Provided you come across one of the rare extensively managed meadows or pastures here in Upper Swabia. Or on surfaces, which are extensively maintained in the sense of the biodiversity protection again, thus once or twice mowed and not mulched.
Above all, I have to think of the dry grasslands of the Swabian Alb when I move around the island. 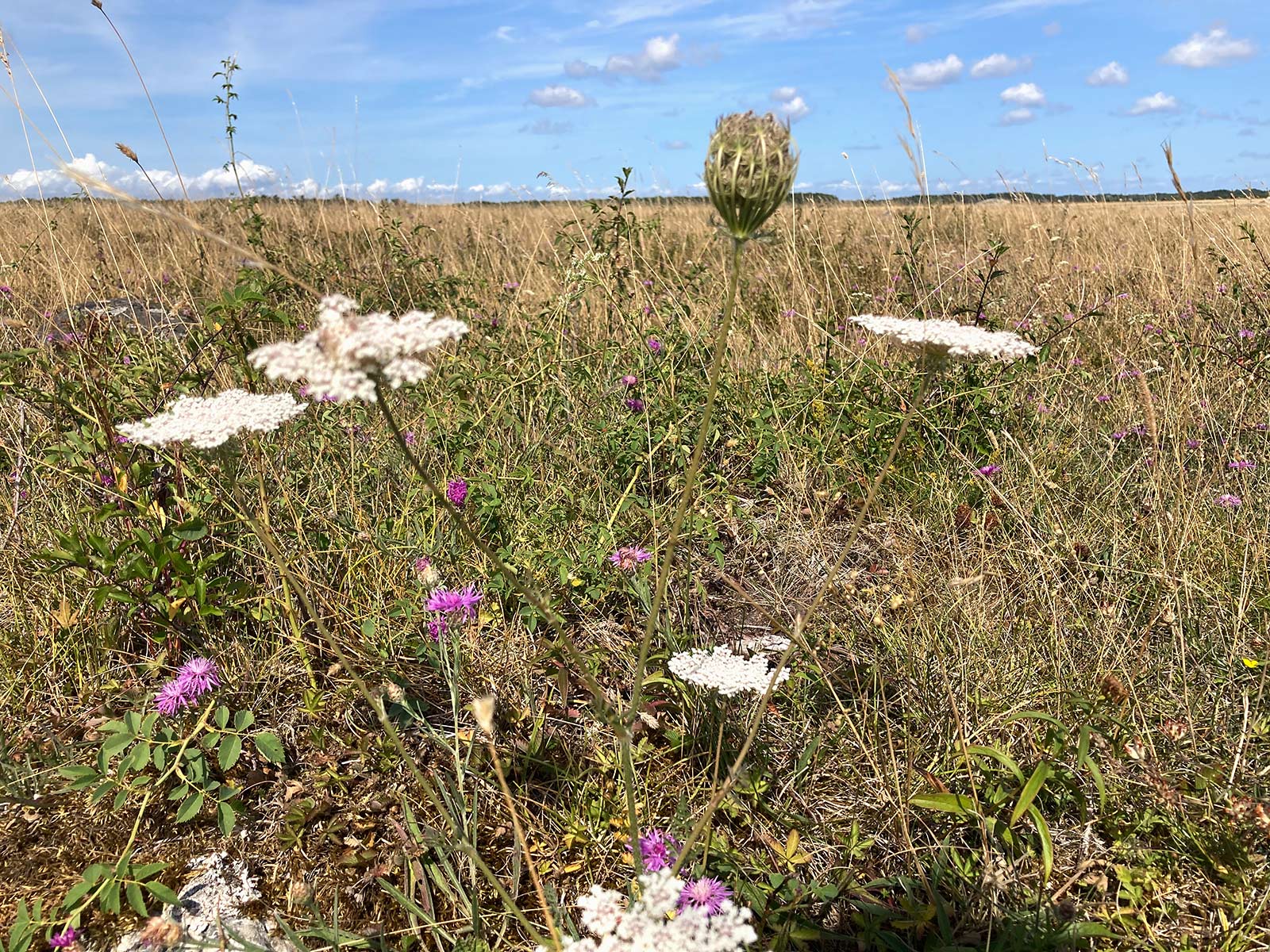 .
Once again proof that it is the location that decides in the end. That is on the Swabian Alb namely quite similar: limestone with a thin humus layer.

In landscape conservation areas on the Alb, the areas are tended by migrating shepherds with their animals, here mostly by cows. The effect is similar, even if the two animal species do not have exactly the same plant preferences. The landscape does not become overgrown so quickly, and the diversity of species is great.

You can still find quite different types of meadows on Öland, of course, depending on the influence of the subsoil, water availability and the respective care. In our immediate vicinity at the mill, it is mostly the lean-dry sites. 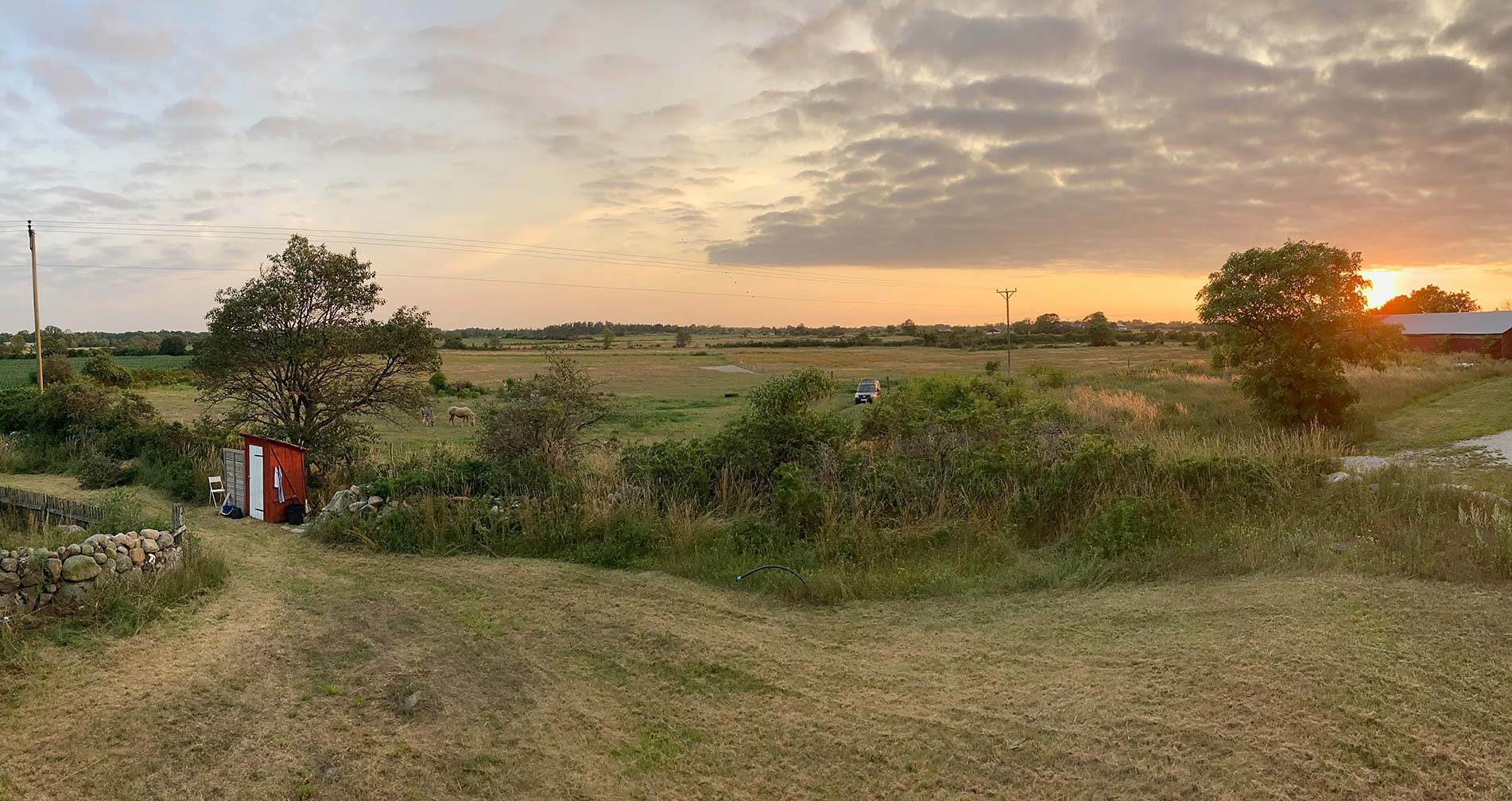 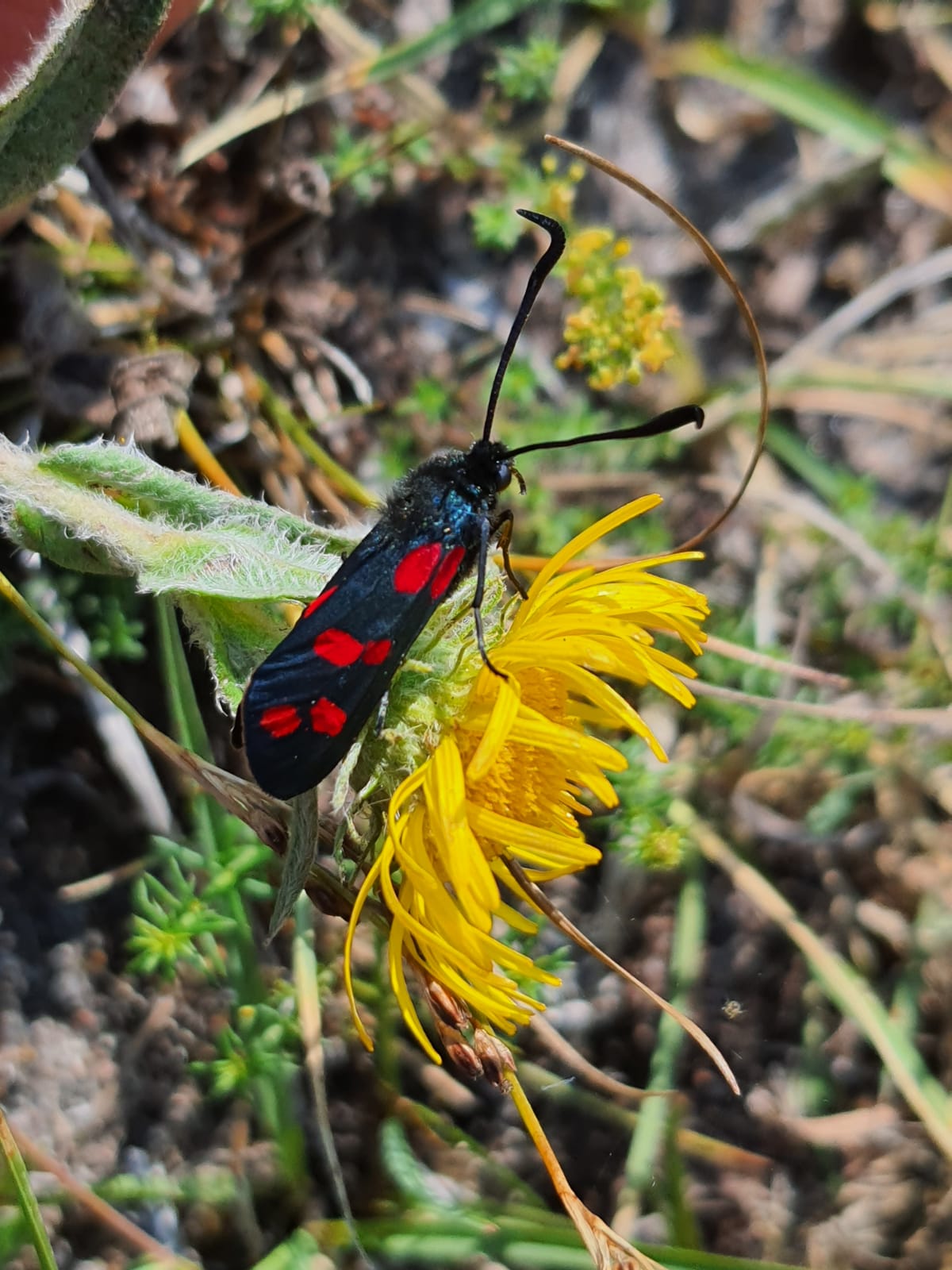 This post is not about writing up complete plant lists. It's more the simple details that I pick out here as examples and underline in between with a photo.

And then there is the matter of driving down, which is easier here than anywhere else, especially easier than in the bustle of cities. You leave that behind almost automatically when finding and identifying plants and animals. 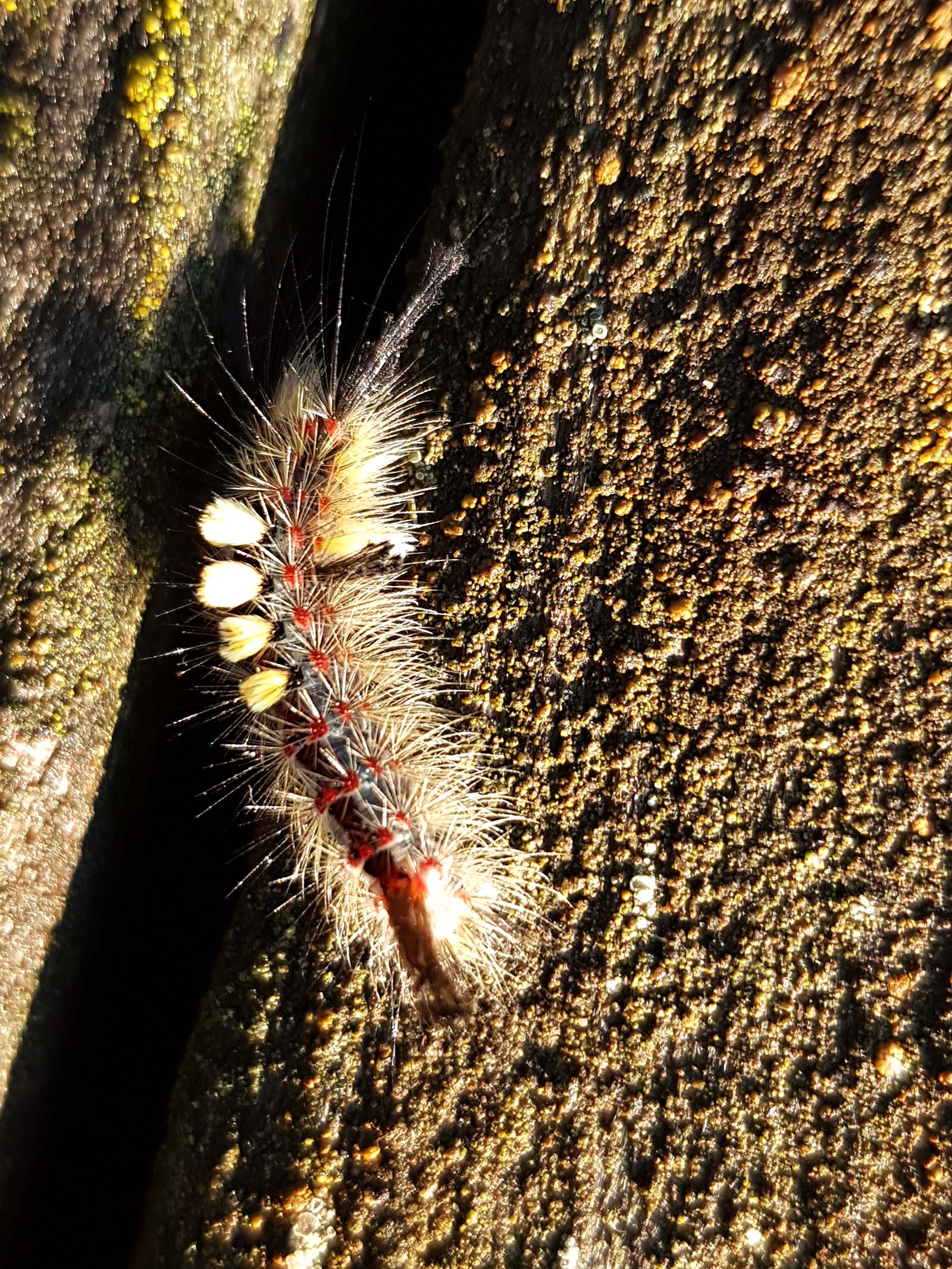 Sloe brush moth (Orgyia antiqua) - no wonder with the sloe density here
.
The next site is approaching water. Here, in other, rainier and stormier seasons, flooding occurs. So the plants that can stand it here must all be reasonably salt tolerant.
Cows graze here anyway, and the brackish water doesn't seem to bother them either. Anyway, I watched them drinking. 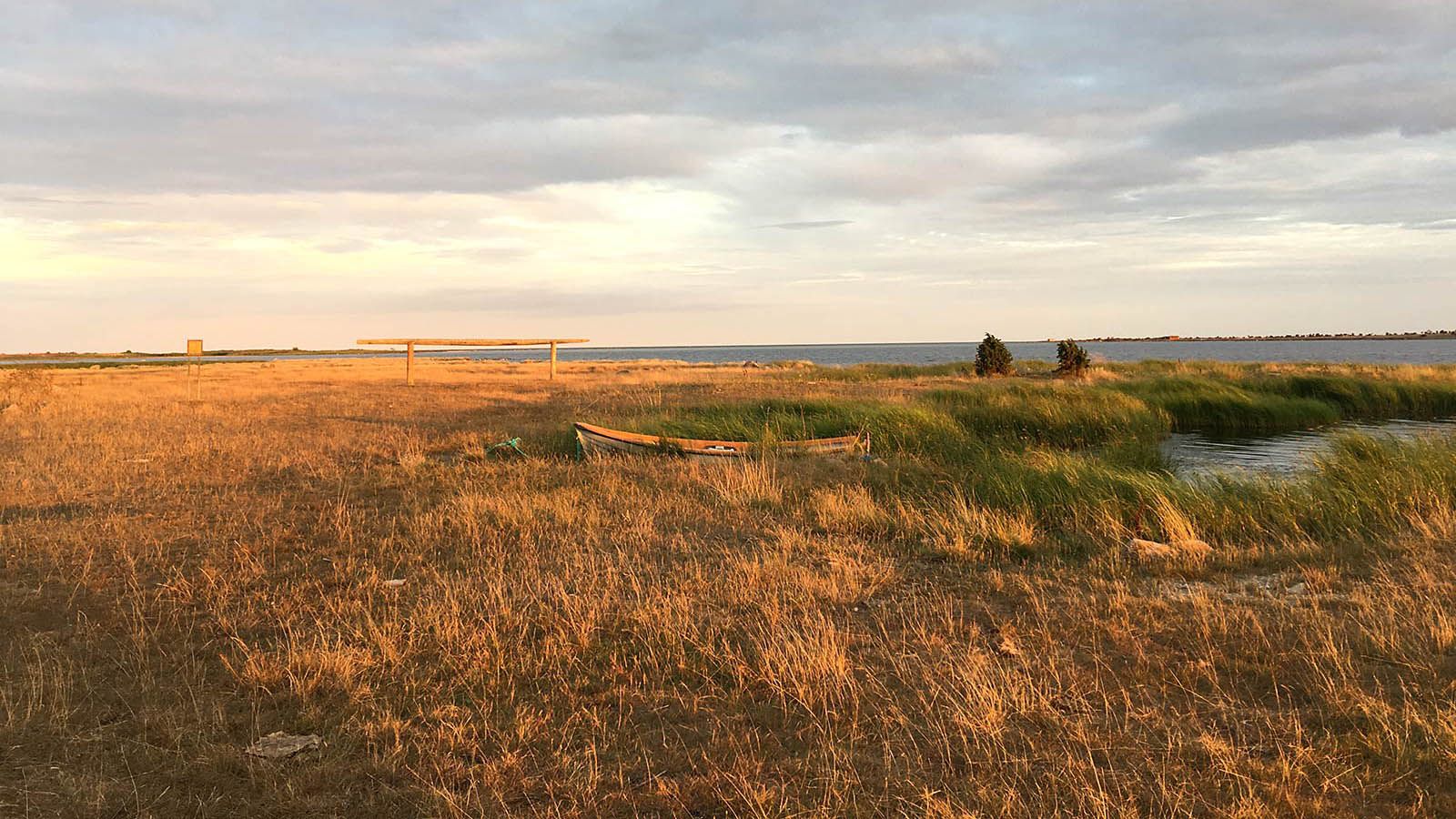 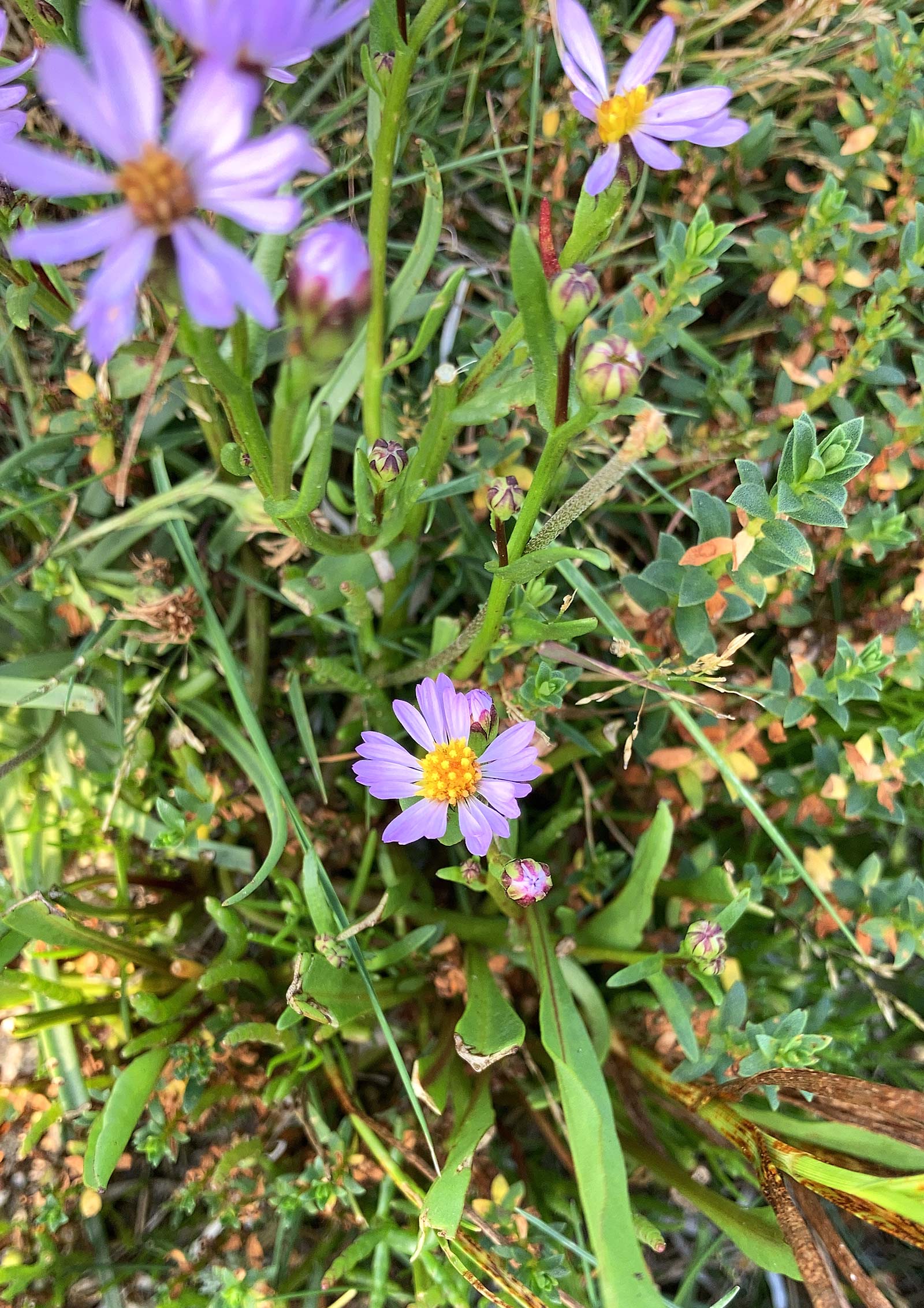 Towards the north, as we travel along the coastal cycle route, the emphasis shifts in the composition of the "vägkanten". On Öland, the maintenance of roadside vegetation is quite high in the conservation measures. In other parts of the country I have not always experienced this,
. 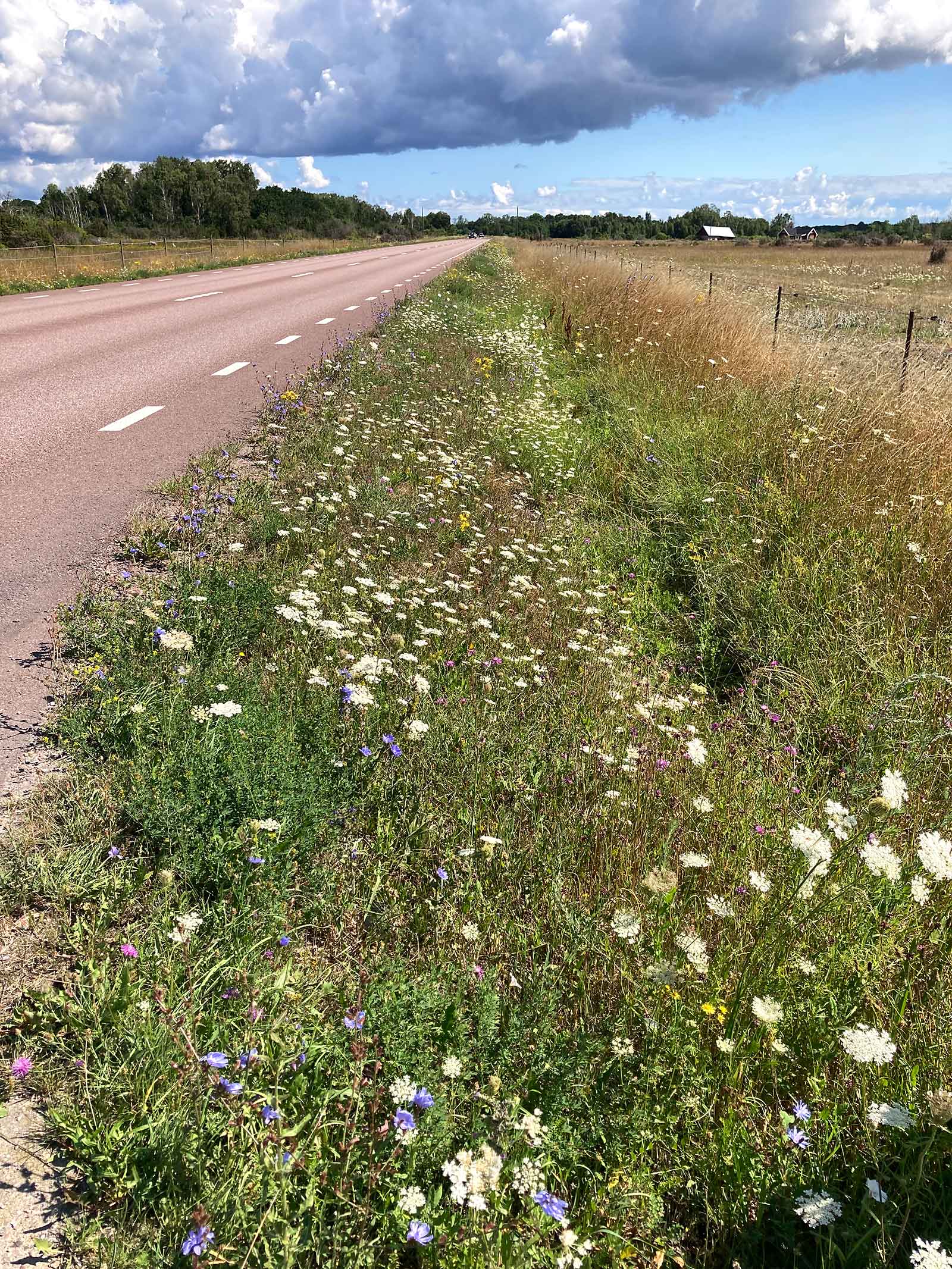 In places here there are dense stands of woolly zest, with its thick, felty leaves perfectly adapted to such lean-dry sites. Last year I bought only two plants at 3.50 € in the nursery for my meager bed. There would come here quite a bit together.

And of the metallic shining rose beetles (Cetonia aurata) I have seen this year really many. They like it warm, so they fit well to the sunny island Öland. The larvae find an ideal habitat in the rotting wood, of which there is plenty here. In Germany, the rose chafer is highly endangered and is protected. Perhaps that is why it was named Beetle of the Year in 2000. Simply so that he gets some attention
. 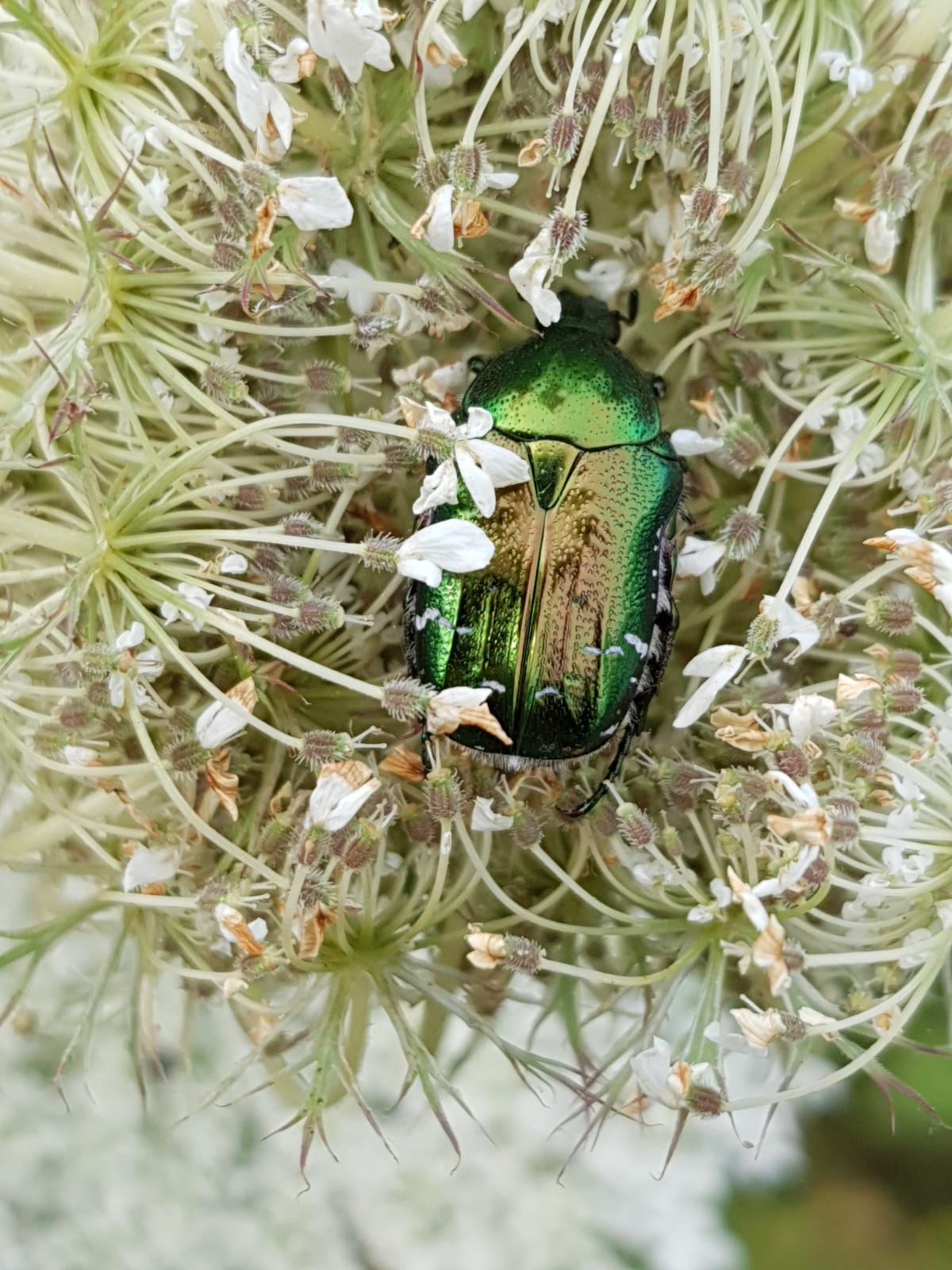 Rose beetle in the wild carrot bed
.
The walls of flat limestone that characterize the island landscape here are made for all the heat-loving reptiles. Unfortunately, I did not step on any adder, with the grass snakes that I encountered in the water, I did not have the phone at hand. However, I found one on pixabay that reproduces the situation almost exactly.
Of the blindworms I have sadly seen only one flattened on the road :( 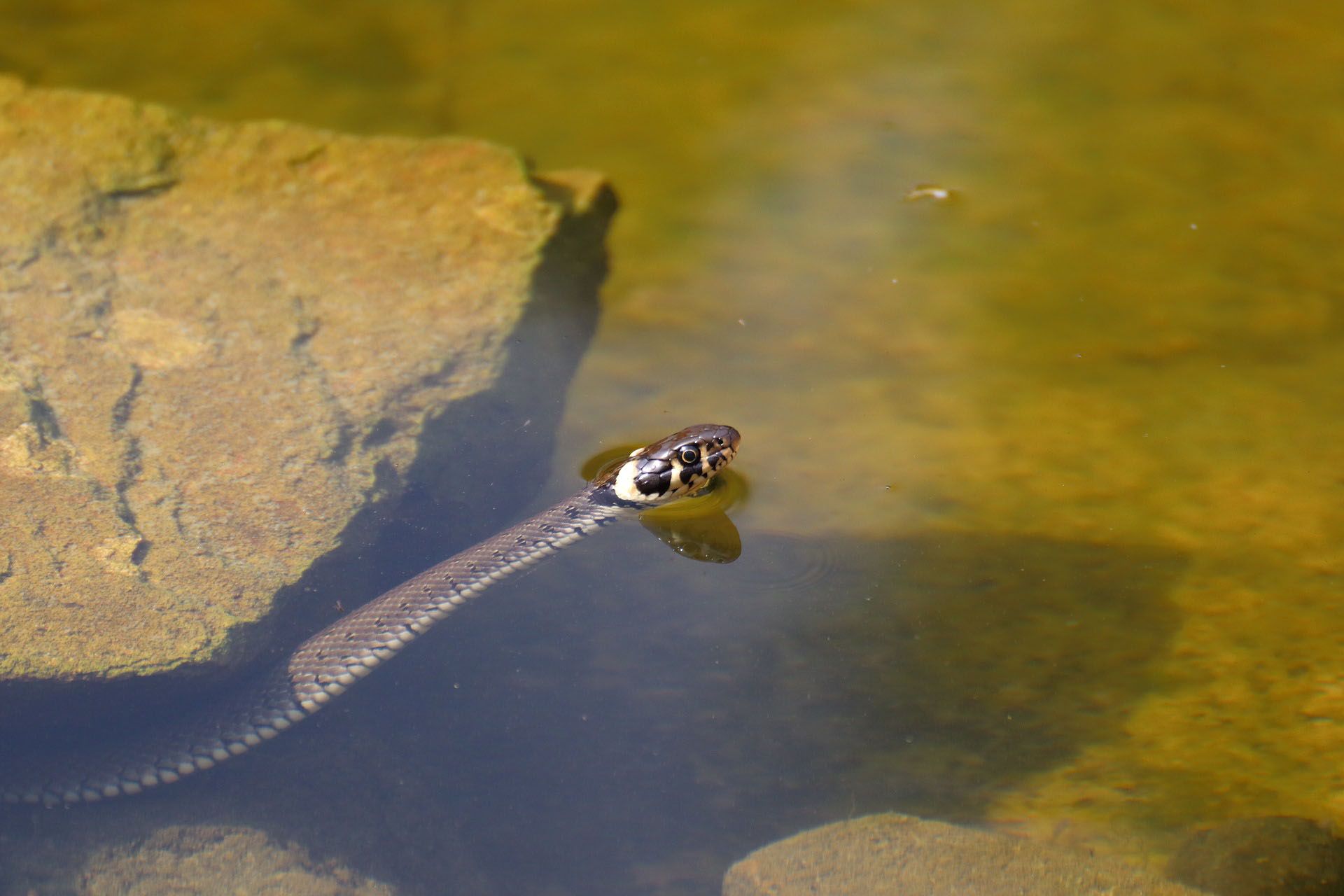 For it "fjärils" accompanied me at every step. That however times a lemon butterfly or a blue remained sitting so long calmly, until I had focused, was rarely the case. 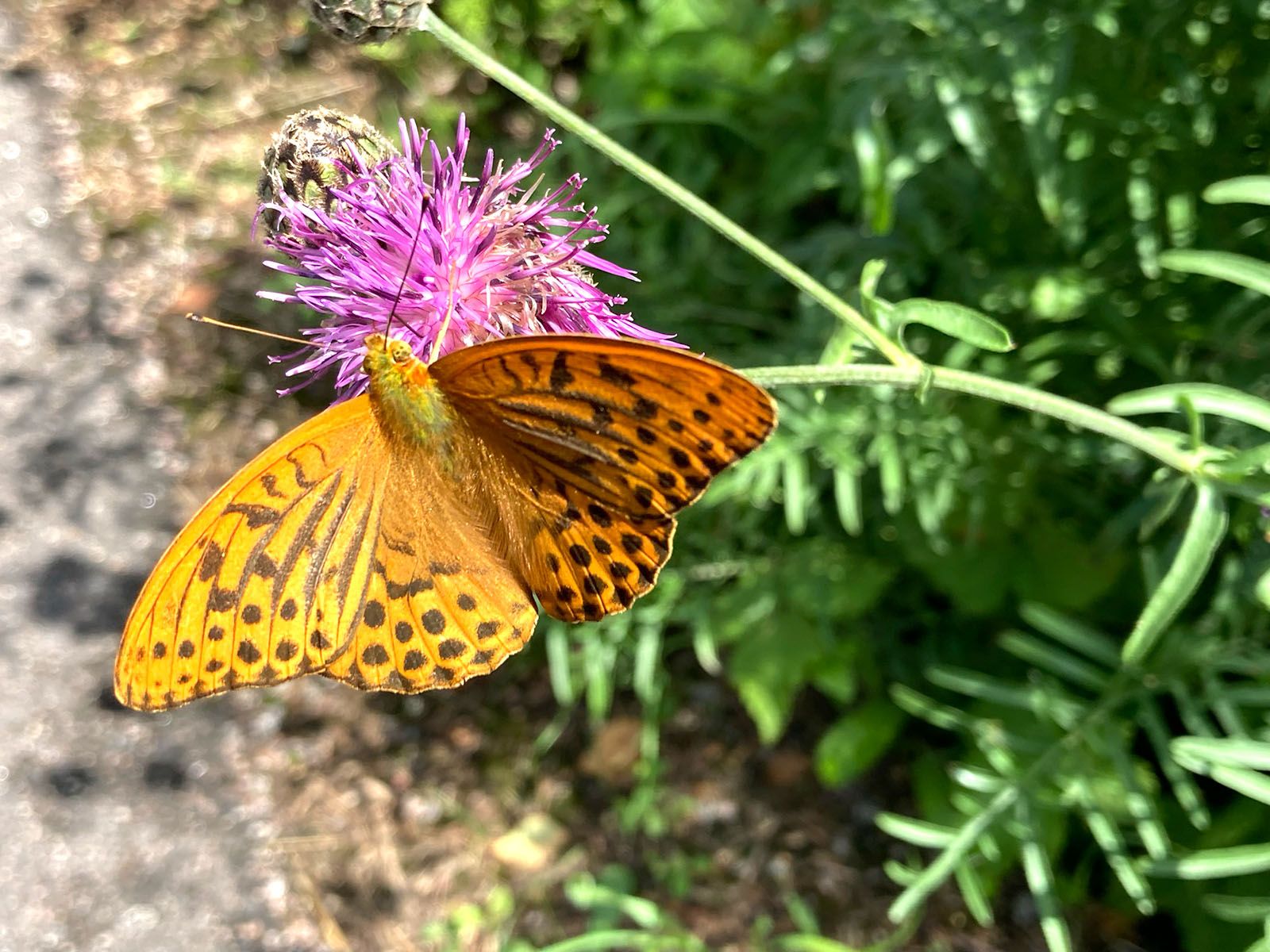 For the butterflies this, in large parts, extensively cultivated landscape is an ideal living space. Before my departure from the rain-intensive summer in Germany on 10 July I could observe this year hardly at all a Gaukler of the air. And this in a natural, quite structure-rich, not so quite small garden.

If you go on Öland with the camera (this time only the cell phone camera was available, the car stayed at home, so there was not much luggage inside) on insect search, you have it not difficult. Wild bees, grasshoppers or the most different kinds of beetles buzz, hop and crawl in front of the lens. You just have to keep your eye on them and be patient enough to catch them in the tenth of a second they are still. Fortunately, the sulfur beetles at the bottom of the picture are not so lively and nervous. 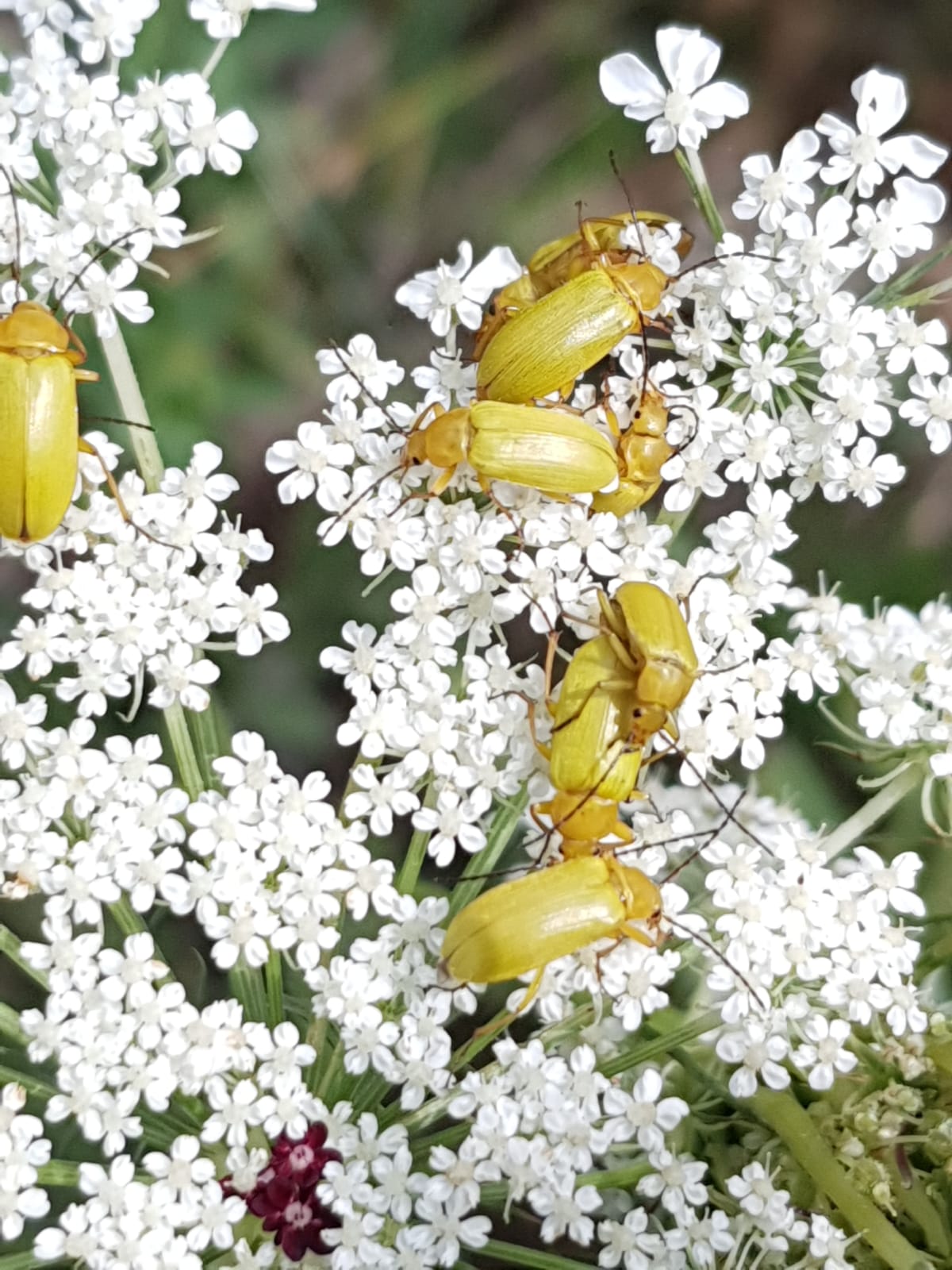 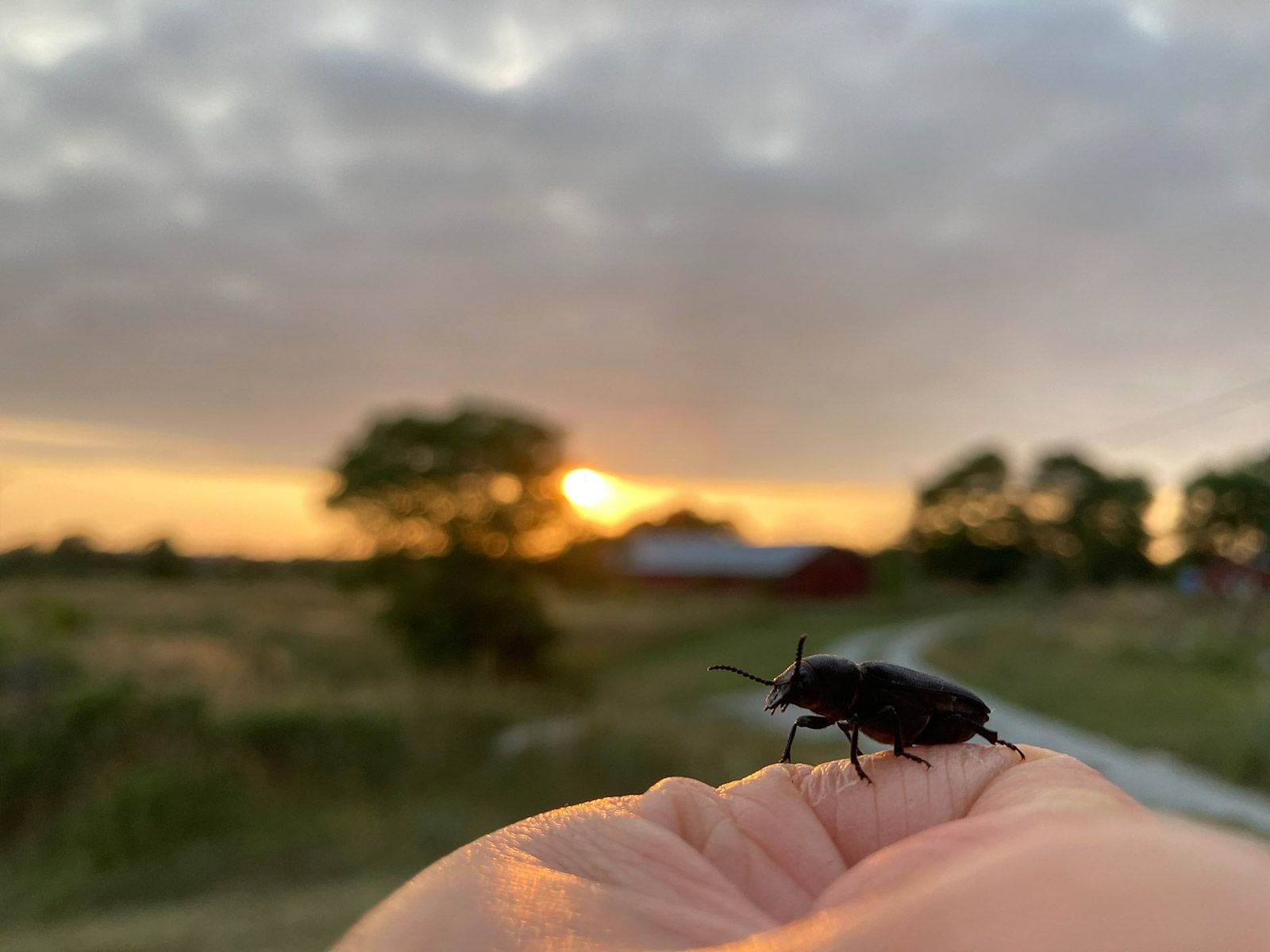 When you're on vacation, you live more simply. You take the time to look more closely. On little things, for which one finds in the everyday life mostly no longer the leisure and composure. Although one knows exactly that it is helpful... with the grounding and breathing. 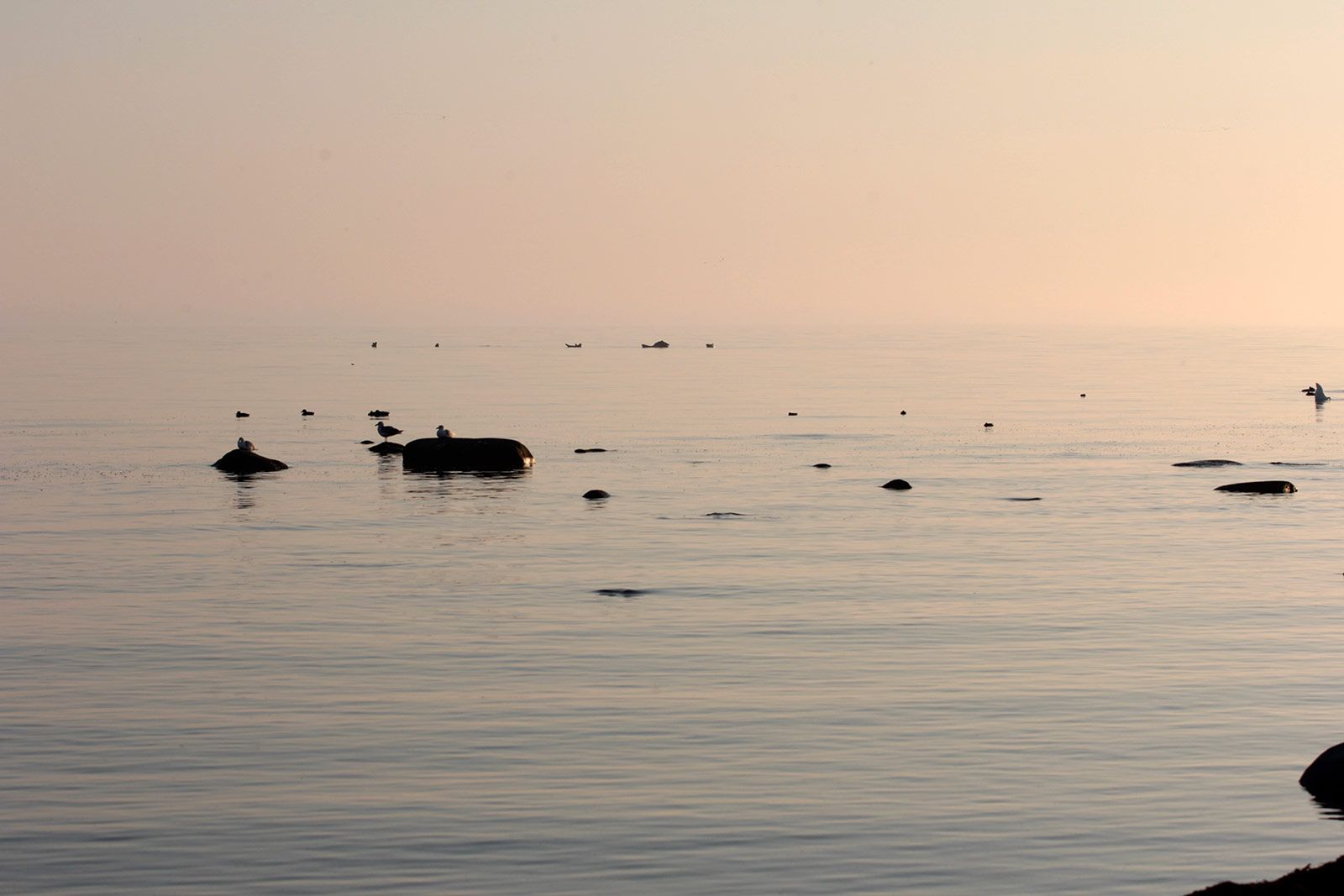 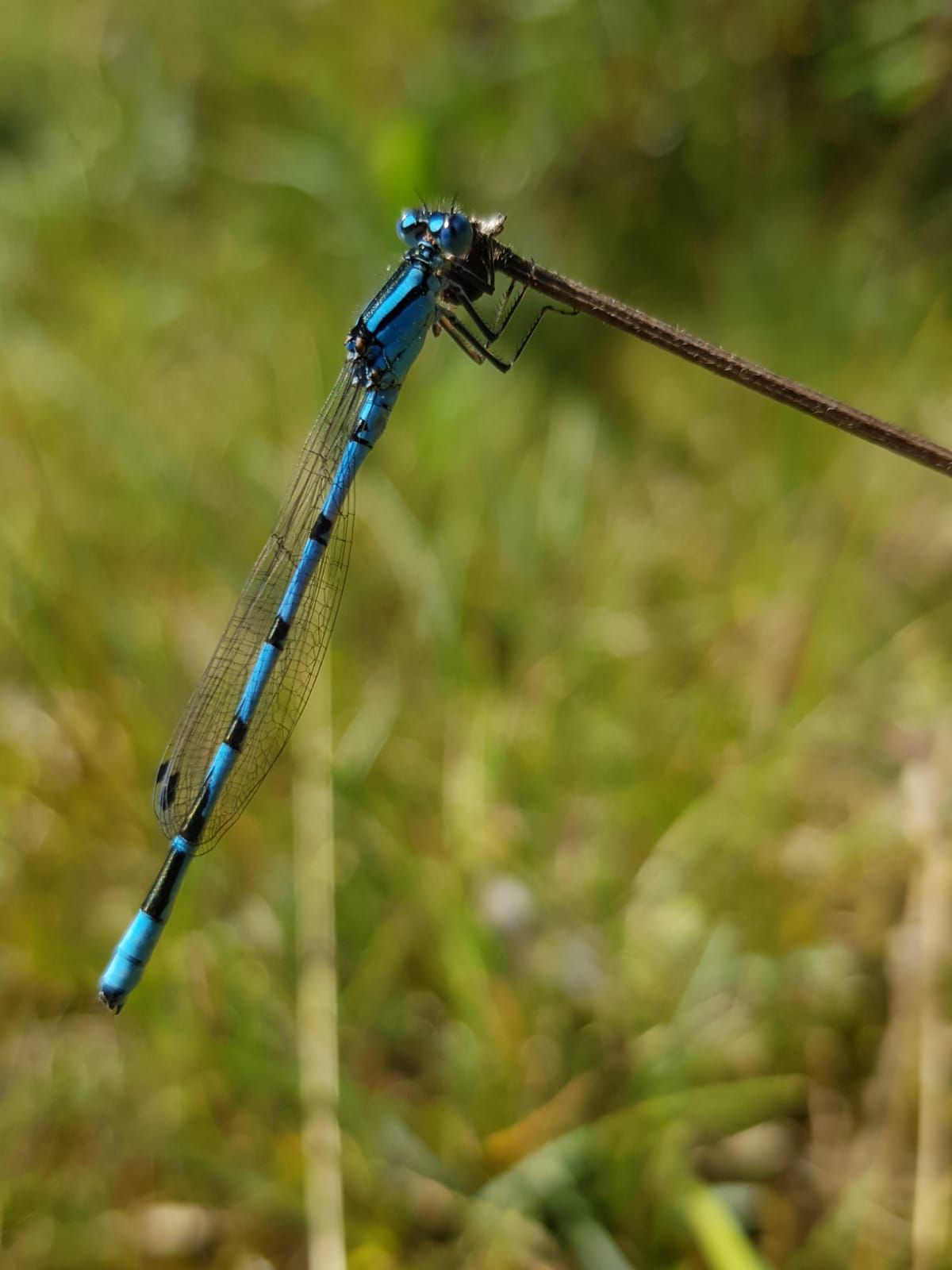 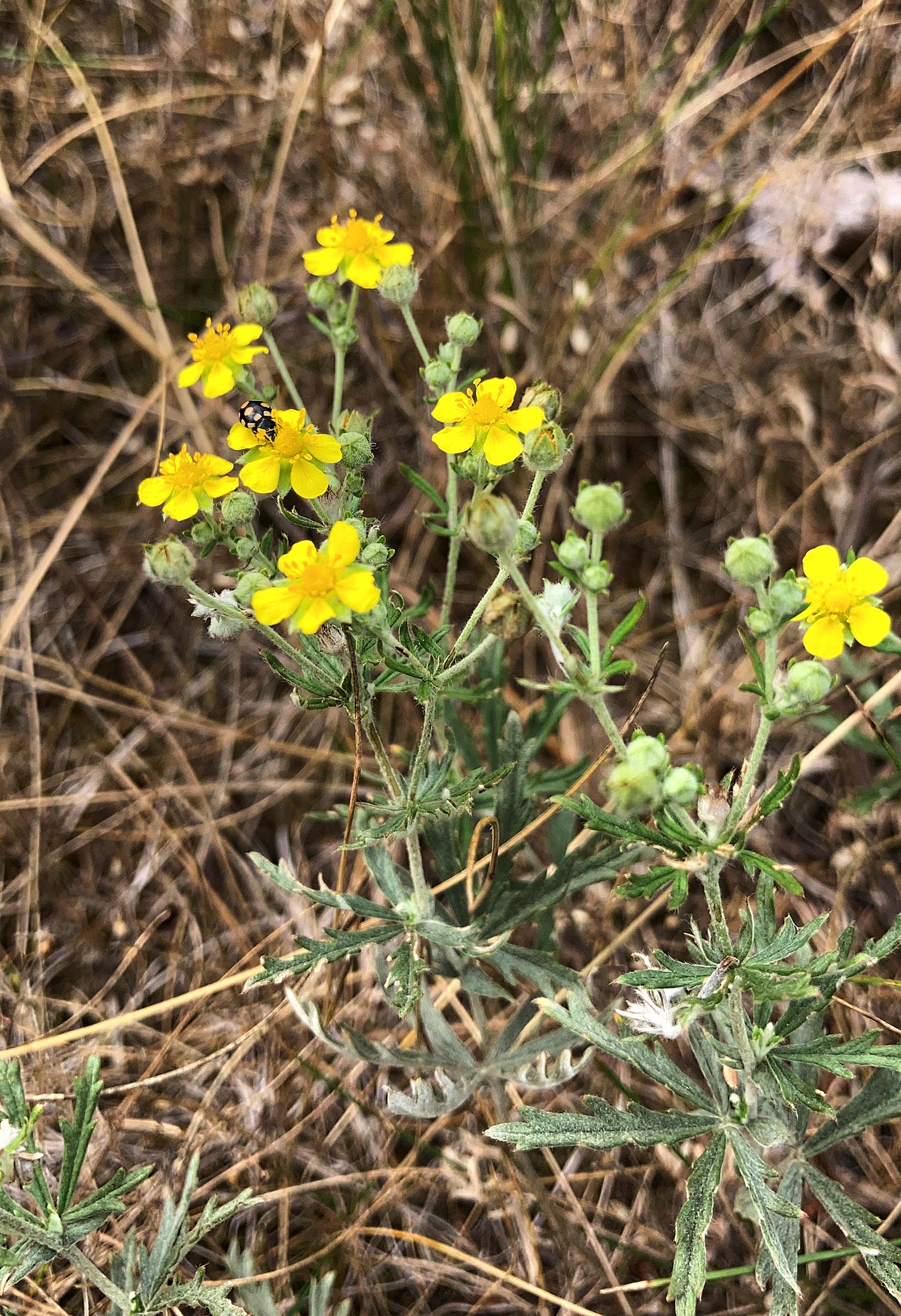 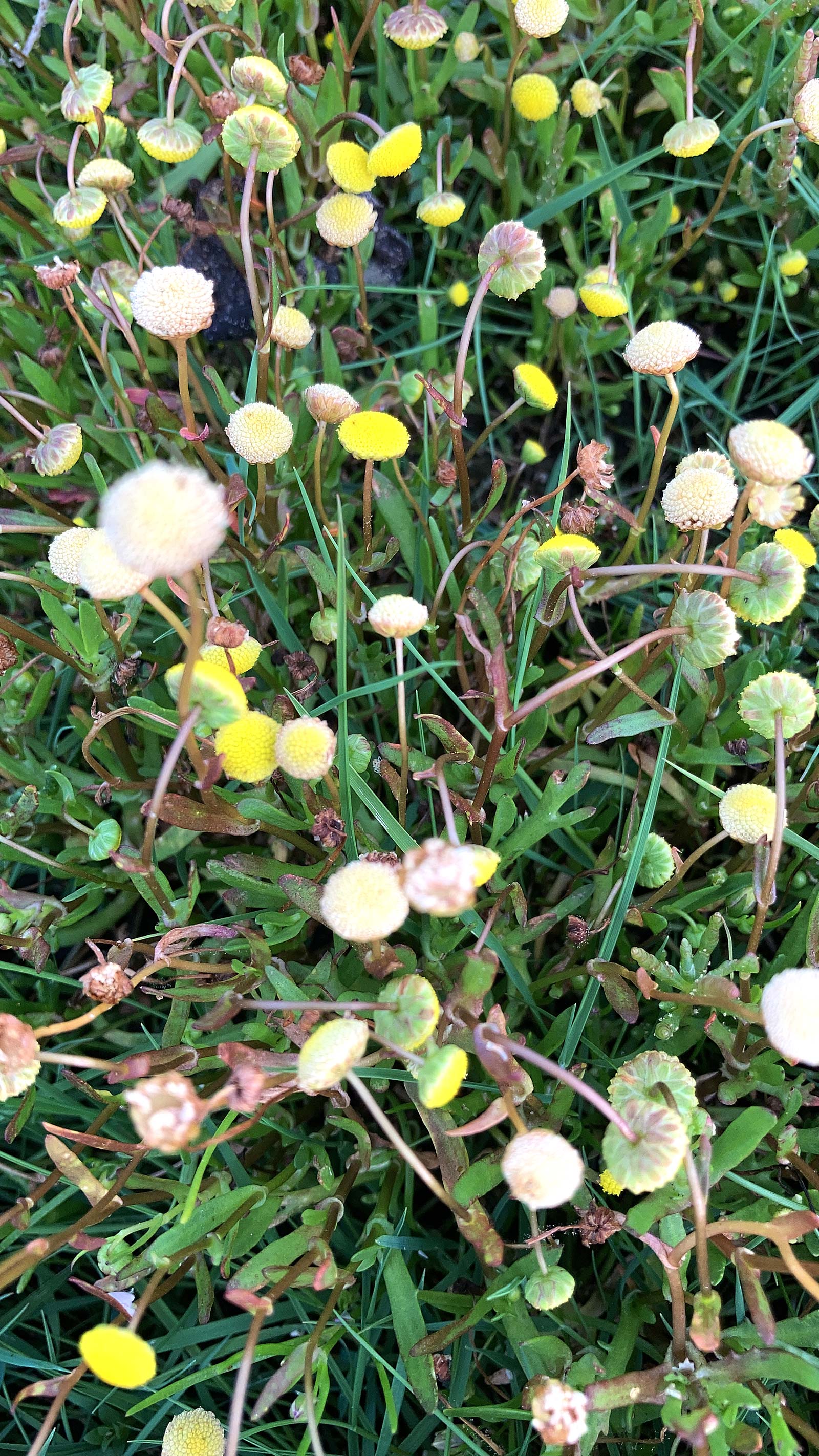 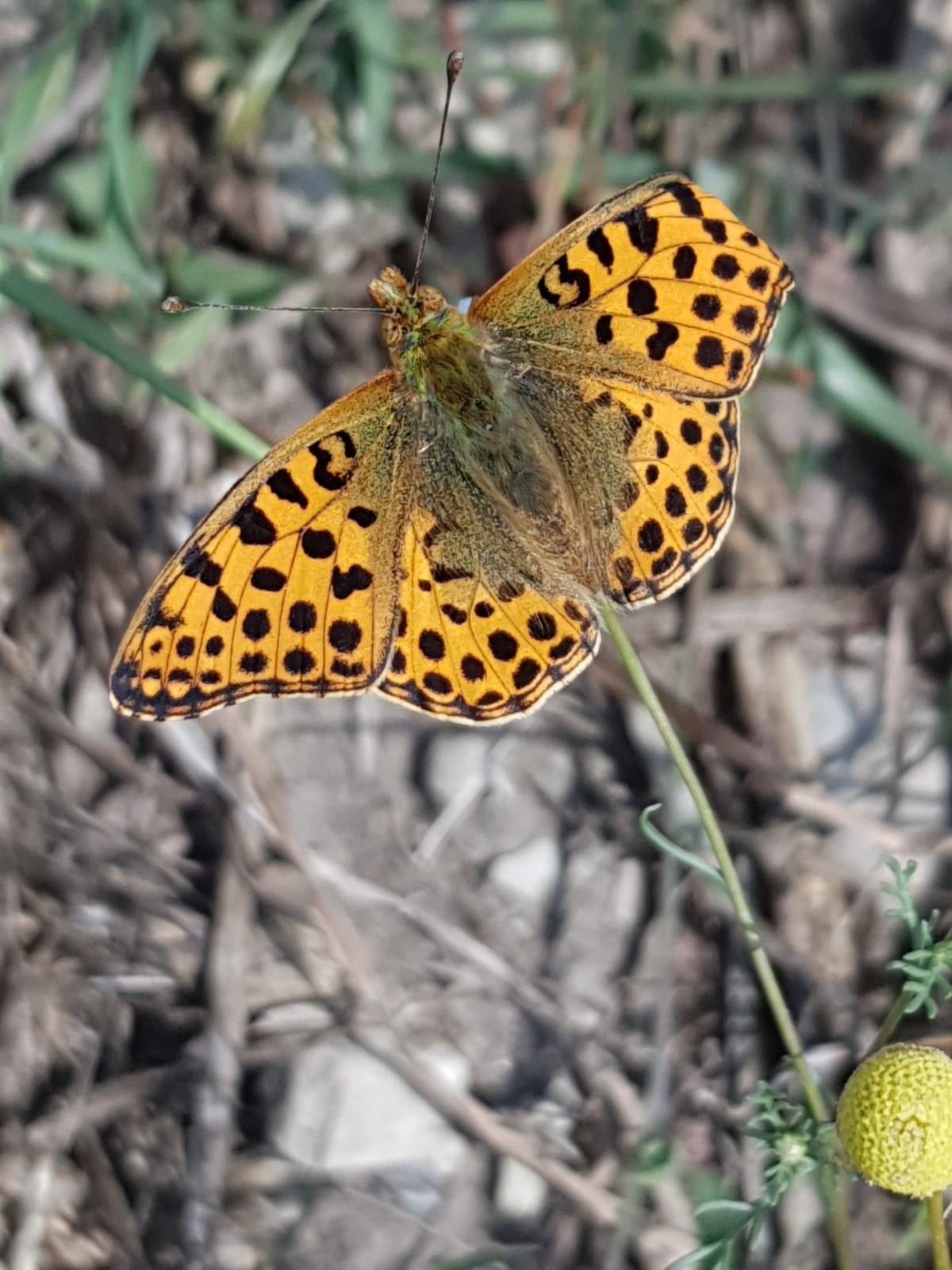 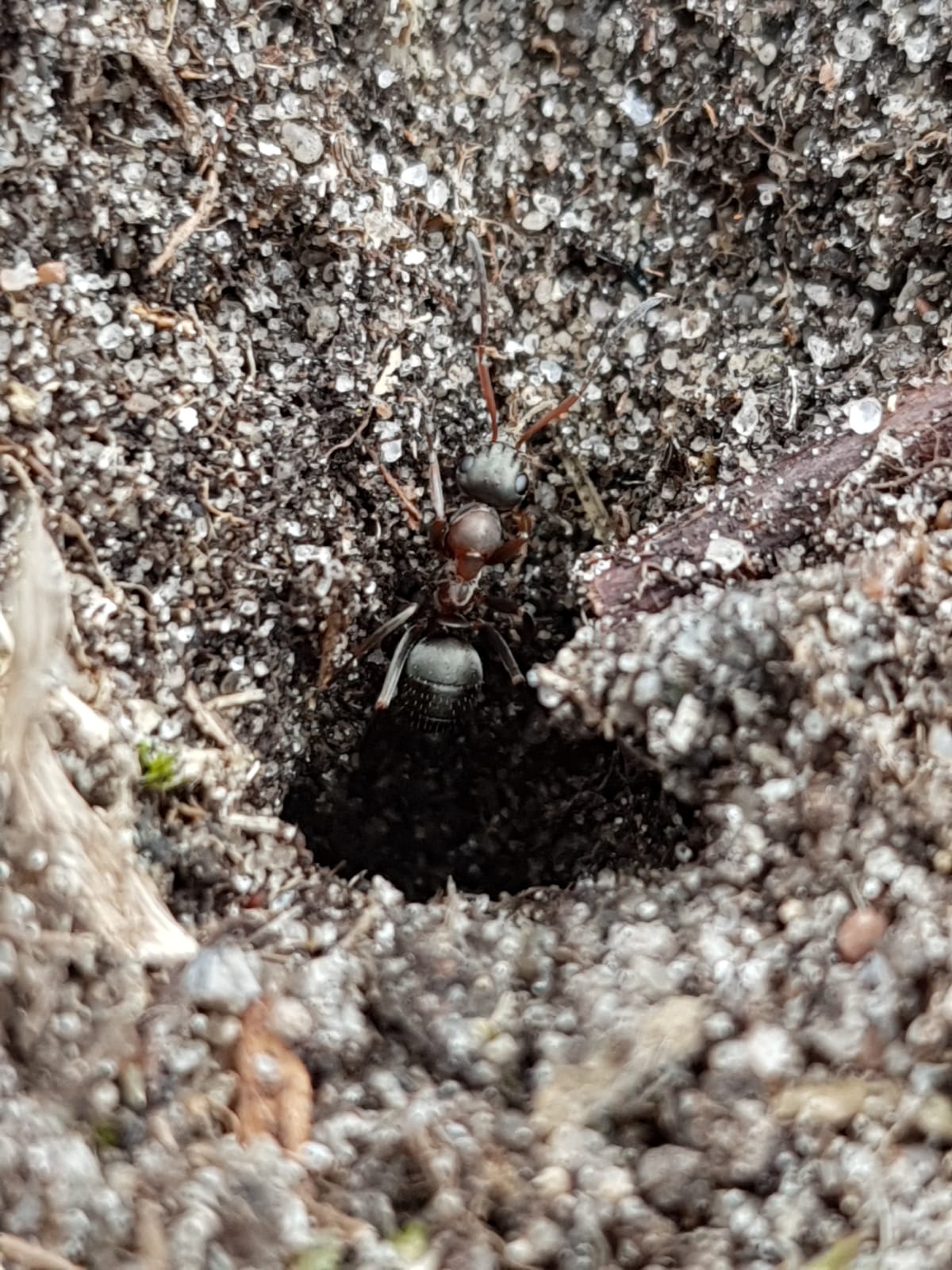 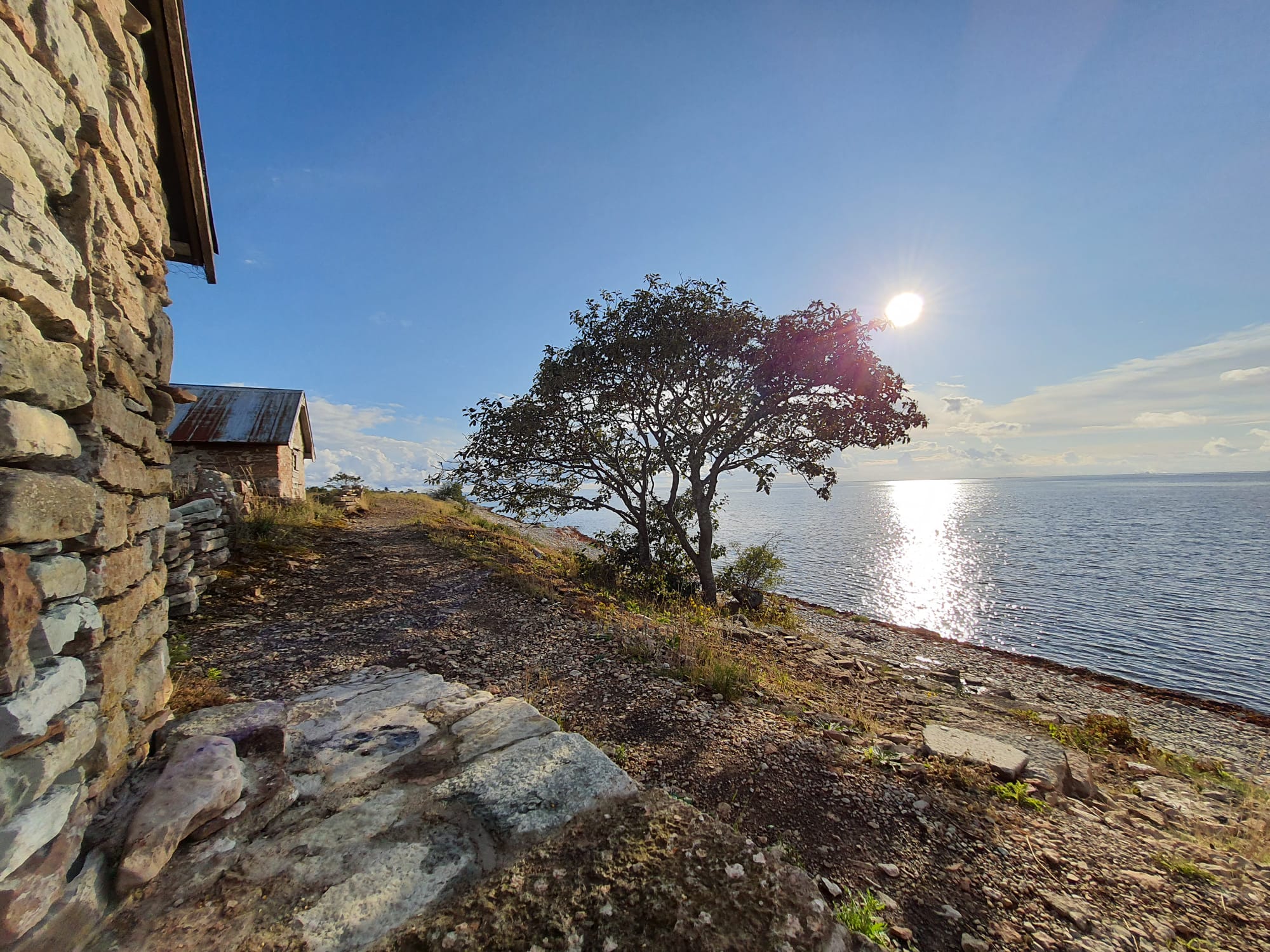